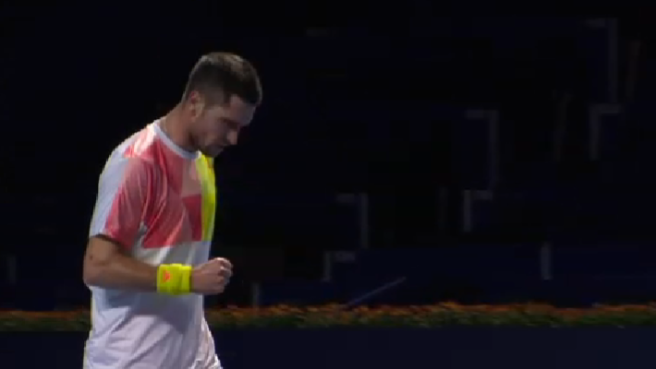 My first memory of watching Mikhail Zverev was during the 2015 grass-court season. The elder Zverev brother was bamboozling Marin Cilic on the lawns of Halle, Germany. His volleys were precise, his passing shots were lethal. He played as well on the back foot as he did the front. I was left astounded that I had never witnessed him compete before.

The next time I watched Zverev, it was court-side at the Aegon Open Nottingham. This time, his game took my breath away. Every lefty strike spun dangerous close to the net cord, creating a slick, deep shot. The pace was swift, the net-play incessant. I hardly understood how he lost the final tiebreak versus Sam Groth.

I also hardly understood what he was doing on the Challenger circuit and in ATP qualifying for most of this season. Surely you only had to glance at the former world no. 45 to see the sheer quality radiating from his game? Surely it was only his mentality – that saw him, many times, fall from the brink and lose in three sets – that was holding him back?

But nobody talked about Alexander’s older brother, unless Mischa was sat in the rising star’s box. He was never labelled a threat, never brought up in conversation, and rarely appeared in ATP World Tour main draws. So I began to wonder: was Mischa Zverev really as good as I thought he was? Or was I just imagining it?

Back in February, Mischa Zverev was ranked world no. 175. All through the year, he was losing to players outside of tennis’ elite realms. Even as recently as July, he was still competing in ATP Challenger events.

But come back to October, and the 29-year-old has – after making several small steps of progress – reached his third quarterfinal of the month. In each situation, he has achieved the feat as a qualifier. At the Shenzhen Open, Zverev fell only to Richard Gasquet in two tiebreaks in the last eight. At the Shanghai Rolex Masters, he was a tiebreak win away from the unthinkable: victory over world no. 1 Novak Djokovic. While the 3-6 7-6(4) 6-3 loss kept him out of the biggest semifinal of his career, it shot the lefty up from world no. 110 to world no. 68 – his highest ranking since October 2009. And having entered the Basel Indoors as a no. 74-ranked qualifier, Zverev is yet to surrender a set – with Vasek Pospisil, Ryan Harrison, Taylor Fritz and Guido Pella his victims en route to another last-eight appearance. These heroics have earned him a shot at top seed Stan Wawrinka – who was beaten indoors by his little brother only last month. With Zverev senior’s recent run of form, few are ruling out the possibility of an upset.

So what is the point of this slightly random post? It is this: If you see something in someone, then stand by it. If you think that the world no. 445 is going to be a star, do not back down because people disagree with you. Most people probably haven’t seen them play. Other people might have caught them on a bad day. And just because journalists and reporters are not talking about this player, or you haven’t got a high-profile in the game, or you don’t know tennis like the back of your hand, it doesn’t mean that you are wrong. We all have two eyes in our heads, and we are all capable of spotting something that other people might have missed.

While everyone was arguing over which of Grigor Dimitrov, Kei Nishikori and Milos Raonic was going to assail tennis heights the fastest, my sister and I were more interested in this 20-year-old guy called Dominic Thiem. True, he was not bobbing around the top 20, beating the elite or displaying a particularly flashy game. Nevertheless, his backhand was something to behold, and his composure was admirable. Nowadays, he’s not doing too badly.

If you think a player is good, do not let anyone change your opinion. Anyone, other than the player themselves. And if you ever feel like giving up on keeping up with their progress, think about those future bragging rights. You might just be observing a future star.

Thanks for reading! What are your opinions on Mischa Zverev? Do you have any lowly-ranked tennis players on your watch-list? Share your thoughts in the comments section!