WARNING: The following content is flooded with sarcasm and dry humour. Nevertheless, 99 percent of it – and 100 percent of all core facts – remain true.

‘The Greatest Eight’ descended upon Singapore for the WTA’s season finale – which is weird, considering one of the semifinalists is ranked world no. 9. Still, featuring four players with a losing all-time record at the WTA Finals, Saturday’s semifinals are bound to be the best thing since sliced bread. The Tennis Journal previews the two clashes that everyone has been anticipating since the week began.

The world no. 9 takes on the world no. 8 for a spot in the biggest non-major WTA final of the season.

You have to hand it to Svetlana Kuznetsova. The veteran Russian scraped the bottom of the barrel to make it into Singapore’s eight player field – winning Moscow’s Kremlin Cup the day before the elite tournament began. She then endured two marathon clashes to become the first woman into the semifinals – ahead of seven women actually ranked inside the world’s top eight. It’s just a pity that the 31-year-old comes into the penultimate round on a two set losing streak. In fact, Kuznetsova – who brought a near-perfect 44-21 win/loss record into the WTA Finals – has won only one of the last 12 games she has contested in Asia. But with a season-best major appearance of a fourth round at Wimbledon, there is little doubt that the first-time semifinalist can turn it around against a woman ranked only one spot above her in the rankings.

Dominika Cibulkova also needed a late charge (AKA, played four weeks straight in a last-minute panic) to make the cut in Singapore. This was the first time in her 12-year career that the one-time major finalist joined the field, and she will have every British tennis commentator in the business in her corner come Saturday. Previously renowned for her ability to crush elite opposition until the time came to close out the actual win, the 27-year-old has cut a more consistent figure this season. Having won five of eight clashes with top ten opposition, Cibulkova is even on a five match winning streak in her rivalry with the only ‘Greatest Eight’ competitor ranked in the realm of World Number Nine And Below.

All the same, the feisty pocket rocket – with an insane talent for identifying types of tennis ball by smell alone – takes a losing record into the last four stage. After winning the middle set in her opening clash with world no. 1 Kerber, Cibulova was warmed up… for a 6-1 6-4 humiliation at the hands of hot-and-cold Madison Keys. Only a straight sets defeat of the incomprehensible Simona Halep saw her into the semifinals. Had she lost the tiebreak that sealed her 6-3 7-6(5) triumph, she’d have been booking the flight home.

THE QUESTION: Can Cibulkova live up to her higher ranking – or at least drive Kuznetsova to chop off some more hair? 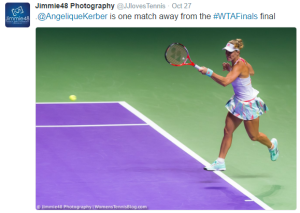 The best counterpuncher in the game faces the woman who offers nothing to counterpunch in the second semifinal of the day.

Defending champion Agnieszka Radwanska – back at the venue where she won her biggest-ever title with a 3-2 win/loss record – has faced the toughest of roads to return to the final four. World no. 9 Kuznetsova proved too much for the Pole, with match point offering no point after Radwanska went down in three sets. Nevertheless, she got the better of Garbine Muguruza – whose impressive season featured ultimate glory at the French Open, Roland Garros and Paris. It was a terrific victory for Radwanska, who crafted out her very first top eight triumph of the ten month season.

An essential victory over US Open finalist Karolina Pliskova sealed Radwanska’s progression to the semis. With her 6-0 head-to-head record against the Czech – the Pole holding a 12-0 advantage in sets – few people saw it coming. But the 27-year-old only needs a walkover in one of the next two rounds, and the zero time Grand Slam winner can become the first ever woman to claim the WTA Finals crown with only three match wins intact twice over. Imagine the celebrations!

Angelique Kerber, however, is unlikely to give her the required walkover. A first round loser at the French Open back in May, the top seed avoided making the same mistake in Singapore – beginning with a three set escape against Cibulkova on Sunday. Dropping just 13 games in swatting aside Halep and Keys and reaching the semifinals, some will wonder whether Kerber’s straightforward progression has been due more to her angled groundstrokes, or the calibre of her competition. Given that the German has won two Grand Slams and an Olympic silver medal this season – plus reached a maiden Wimbledon final – Kerber should be given the benefit of the doubt. Mentally sound and generally consistent, the world no. 1 has been doing her impressive best to fill the gaping WTA Finals hole left by Serena Williams.

THE QUESTION: Is Kerber the saving grace of this semifinal line-up?

Tune in at 4pm local time if you want to catch the blockbuster semifinals of the WTA’s year-ending showdown – which will be followed by Zhuhai next week.