Four days into the ATP World Tour Finals, we are technically halfway through the tournament. Here are some random observations from on and off the court during the first two rounds of the event.

Is Novak Djokovic back to his best? No way. Has Novak Djokovic struggled this week? Yes, he has. Few expected him to lose a massive 7-6(10) opening set to fatigued Dominic Thiem on Sunday, or to overly struggle against a Milos Raonic surrounded by question marks.

Nevertheless, the Serb came back to hammer Austria’s Thiem in the final two sets of the 6-7(9) 6-0 6-2 win. And his match against Raonic – whilst featuring surprising errors at key moments – contained some of the best tennis of the week thus far, with thrills by the bucketload.

With one match to go in the round robin stage, Djokovic has already topped the Ivan Lendl group. For a guy who has not looked near to his best, that can only be a positive.

Remember when Dominic Thiem played a major load of tournaments in 2016? And we thought he would not qualify for the ATP World Tour Finals as he faded with exhaustion? And remember when he had to pull out of the US Open with injury, and afterwards confessed that schedule amendments could be needed for next season?

Well. Maybe we who cover our faces will be made to look ridiculous. But the 23-year-old – who notched his maiden finals victory with a 6-3 1-6 6-4 defeat of Gael Monfils, who is now out of the event – looks to have changed his mind…

It went from this: 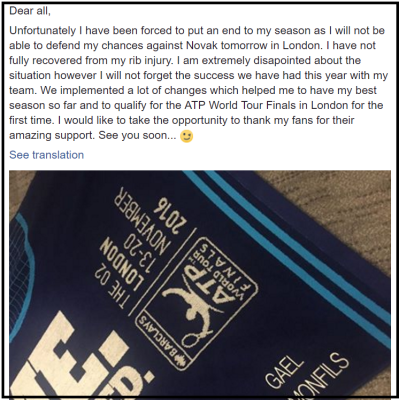 Give him a round of applause! I was not terribly positive about top seed Murray’s latest accomplishments in this piece the other week. But in two matches since becoming world no. 1, the Brit has seen off top ten stars for the first time since June.

On Monday, Murray fought then rolled past Marin Cilic, after the Croat failed to take his chances in the first set. He played mostly brilliant tennis in the second set, but the statistics from the 6-3 6-2 triumph had much space for improvement.

Against Kei Nishikori on Wednesday, you had to give the Brit credit for coming back tough after dropping serve for 4-4 in the second set – and, indeed, after dropping the first set 11-9 in the tiebreak. The match finished up at a record ATP World Tour Finals time of three hours and 20 minutes, and thus both men cannot be faulted for grit and determination. They must also be given leeway when it comes to assessment of their many fatigued unforced errors in long rallies.

But when the match appeared to be on his racquet, Nishikori – who had been recomposing himself continually and impressively throughout the match – crumbled. Andy Murray’s 6-7(9) 6-4 6-4 victory still required him to serve for the match twice, and as with Djokovic, there is still a heck of a lot of room for improvement from London’s top seed. Wawrinka’s 7-6(3) 7-6(3) defeat of Cilic means Murray is yet to qualify for the semifinals.

STAN… THE MAN … WAS THIS THE PLAN?

Wawrinka opened his London campaign with a semi-dreadful showing against Kei Nishikori, fast losing his composure as the Japanese star zoned. From set point down against Marin Cilic, the one-handed-backhander showed mental fortitude to eke out a 7-6(3) 7-6(3) triumph – aided only a little by his opponent.

Last season, Stan Wawrinka denied Andy Murray progression to the London semifinals by brushing him aside in a winner-takes-all clash. It came just two matches after Rafael Nadal had blown the Swiss star and his unforced errors off the court. Is the hot-and-cold world no. 3 about to cause the Brit to stumble again? In three previous appearances at this event, he has never failed to make the last four.

(The only scenario in which Murray does NOT make the semifinals now is if Wawrinka wins in straight sets AND Nishikori wins in either two or three sets.)

O-KEI! (because I never get tired of using that pun)

Nishikori was inches from victory when he broke back in the second set of his clash with Andy Murray. Then he tossed in a service game that might leave him sleepless for the rest of the week (not ideal.)

For most of that match, the 26-year-old no. 5 seed was the more mature at dealing with his erratic tendencies. While Murray raged, ranted and fumed, Nishikori sighed, shook his head once, and moved on. But as tiredness also set in, it all became too much for the athletic all-courter in the final stages of the match.

The loss of such a stinger could provide motivation the no. 5 seed with motivation for a final group stage match against Marin Cilic – who is out of last four contention. If this is not the case, it could distract him in the most important clash of his week thus far.

Thanks for reading! What are your thoughts on the opening few days of the ATP World Tour Finals? Sound off in the comments!

One thought on “ATP World Tour Finals: Random observations at the halfway point”