Shortly after announcing that she would miss the 2017 Hopman Cup due to injury, two-time Wimbledon champion Petra Kvitova was attacked in her apartment in the Czech Republic by an armed burglar. Kvitova had a knife held against her throat by the intruder on Tuesday morning, and instinctively used her dominant hand – her left, playing hand – to defend herself. The 26-year-old escaped, but not without substantial injuries.

Only time will tell how severe the wounds are, but at the time of writing, Kvitova is undergoing a four-hour surgery for her left hand. Serious damage to tendons and ligaments across four fingers need treating, and the former world no. 2 says she is ‘fortunate to be alive’.

In the aftermath of the news – which was tweeted from Kvitova’s personal account – members of the tennis world rallied to show their support. 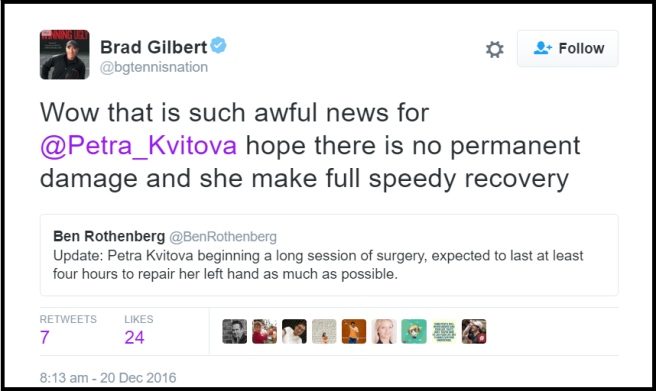