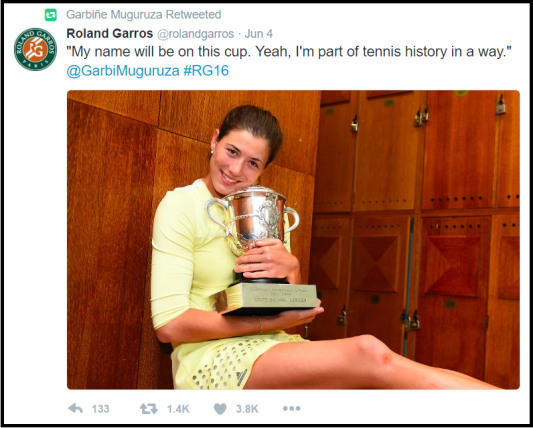 Hola, mis amigos! Sorry it’s been so long – not just since the first edition of my WTA season review, but since the last Tennis Journal post in general. Thank you for your patience. Now you can read about how the clay-court segment of the WTA season was. Enjoy!

If the 2016 WTA season was a book, the clay-court season would have been the blurb.

It was the perfect short summary. Obviously, not everything played out in identical fashion. Year-end world no. 1 Angelique Kerber, who won her first two majors this season, endured a brief period of insignificance in the aftermath of her Melbourne magic. A run to the Volvo Car Open title – her first Premier event victory of the season – punctuated a dirt season in which she lost to world no. 58 Kiki Bertens in the French Open first round. Serena Williams won big once – when in Rome – but was dogged by physical setbacks during yet another segment of the year. And the women who rose on top of the world could not stay there for more than a few days – a picture of the inconsistency outside of the 22-time Slam champion that Kerber tried so hard to rectify this year.

But more of inconsistency later on.

Bertens – one of, for me, two real stars of the clay-court season – went on to reach the semifinals of Roland Garros. While the steady 25-year-old – 24 at the time – did not really back up her final four showing, the rally was an achievement in itself. The week prior to the French Open, the Dutchwoman had beaten world no. 7 Roberta Vinci en route to her first title of 2016 in Nurnberg. And she more than backed up her 6-2 3-6 6-3 first round dismissal of world no. 3 Angelique Kerber in Paris. Madison Keys and 2015 semifinalist Timea Bacsinszky both fell to her zoning game before Bertens – suspected injured – gave a wayward Serena something of a scare in the semis. The top seeded American rarely looked comfortable and had to save a set point en route to the 7-6(7) 6-4 win. For someone who was diagnosed with a thyroid tumour just two years prior, this was all the more special for the tour regular.

The other breakthrough star of the dirt swing was Germany’s Laura Siegemund – further proof that a player in the latter stages of their career can produce career-defining tennis. The breathtaking power play of the home star at the aforementioned Volvo Car Open was something to behold. It brought world no. 71 Siegemund through three rounds of qualifying in Stuttgart, and into the grand finale of the event. What is more, the smart 28-year-old did not drop a set on the way to setting up a final with Angelique Kerber. She thrashed Simona Halep, Roberta Vinci and Agnieszka Radwanska – teaching the top 10 just how to destroy the flimsy serve of the latter – for the loss of just 14 games, before fatigue set in during a 6-4 6-0 loss to Kerber.

Halep, meanwhile, was one of the key women who experienced success during the clay-court season – but in the end, it was something of a let-down. World no. 2 at the beginning of the year, the Romanian struggled to strike the stellar form that had seen her rocket to stardom in the back end of 2013. Dispatched by qualifier Shuai Zhang in the first round of the Australian Open after reaching the semis in Sydney, her highlights prior to Madrid were a couple of quarterfinals.

Thus, triumph at Spain’s Premier mandatory tournament was a massive aid for the then 24-year-old. The world no. 1 may have been an absentee, and the remainder of the tour vastly unpredictable, but the soft draw was just what Halep needed for a confidence boost. Timea Bacsinszky was her highest-ranked victim – and a no. 38-ranked Dominika Cibulkova her final opponent – en route to glory.

Excluding a first round Rome exit to Daria Gavrilova, the form that Halep sparked during Madrid continued up until September – but alas, in one of the most genuine excuses of the year, the weather was her undoing in Paris.

This season’s French Open was a literal sodden mess that we would all be better off forgetting, and it is no good pretending otherwise. After all play had been cancelled on the second Monday for the first time in 16 years, tournament organisers were desperate. Desperate enough to force players onto court in the pouring rain.

Agnieszka Radwanska, who plays with zero power and an extremely crafty game-style, was 6-2 3-0 up on world no. 102 Tsvetana Pironkova when their match was suspended on the Sunday. But as the water soaked the tennis balls two days later, she went down 2-6 6-3 6-3 to the Bulgarian. And the same fate met Simona Halep, whose defensive shots were not enough to better former Slam champ Sam Stosur as they became disabled in the horrendous conditions. The 2014 finalist’s 7-6(0) 6-3 loss – accompanied by the revelation of the eventual champion – left me, for one, wondering what could have been.

Because eventual champion Garbine Muguruza, as an understatement, was not in great form coming into Paris. Year-end world no. 3 she may have been, but the Spaniard had produced nothing better than two quarterfinals prior to her last Roland Garros warm-up event. In Rome, she did not drop a set before going down 7-6(5) 6-4 to Madison Keys in the semifinals, but her first round French Open match did not suggest any substantial change in form. Muguruza, groundstrokes wayward, was in severe danger of losing her opening clash with Anna Karolina Schmiedlova – who had emerged the loser in her last 11 successive matches.

The detail, months later, is not that important. The fact is, Muguruza really did come into her own on her favourite surface – gathering steam after her narrow opening win. The fact is, she did not drop another set throughout the rest of the tournament. The fact is, she played a phenomenal, brilliant match of dominant, dictating baseline tennis to out-strike Serena Williams 7-5 6-4 in the final, and claim her first ever major.

As an 18-year-old, Muguruza was the hard-working, promising, top-spinning talent who was slaying giants under-the-radar, as Sloane Stephens and Laura Robson grabbed the headlines. Even after being sidelined by injury, she climbed every rung of the WTA ladder, ascending inch by inch, progressing from top 20 wins, to top 10 wins, to Premier triumph, to major final – and then to Grand Slam glory. Peers such as Eugenie Bouchard are currently suffering the consequences of bolting from the blue, and failing to develop progressively and steadily.

Nevertheless, despite her smooth ascent, the 22-year-old’s victory seemed rushed. This was not the way one saw Garbine Muguruza claiming her maiden triumph: under grey skies, on the back of poor form – and unable to build on it for the remainder of the season.

To this day, I would argue that Serena – struck by setbacks in the preceding months – was truly hindered by the conditions on that decisive Saturday in Paris. The heavy atmosphere took the direction and edge and potent power off her shots, and her fight was not quite enough to compensate against the nerveless stuff that Muguruza produced on the day.

Garbine Muguruza was always going to be a world class star, and – there is no doubt in my mind – she will still be a world class star. She is far too talented, devoted and determined not to be a leading female tennis player of the future. But the fact remains, she was less than impressive in the lead-up to her maiden major, and could not back up the victory afterwards.

Also – as my friend Hannah Wilks said in the aftermath – “Paris did not deserve Serena’s 22.”

The WTA clay-court season was the most lacklustre, muddled and insignificant part of it. And if I said previously that I thought this segment rather summarised the year as a whole…

Honestly, I am not really inclined to backtrack.

Thanks for reading! Part one of the review is here, if you missed it. Do you think that the 2016 clay-court season was pretty dire, or did you quite enjoy it? Sound off in the comments section!